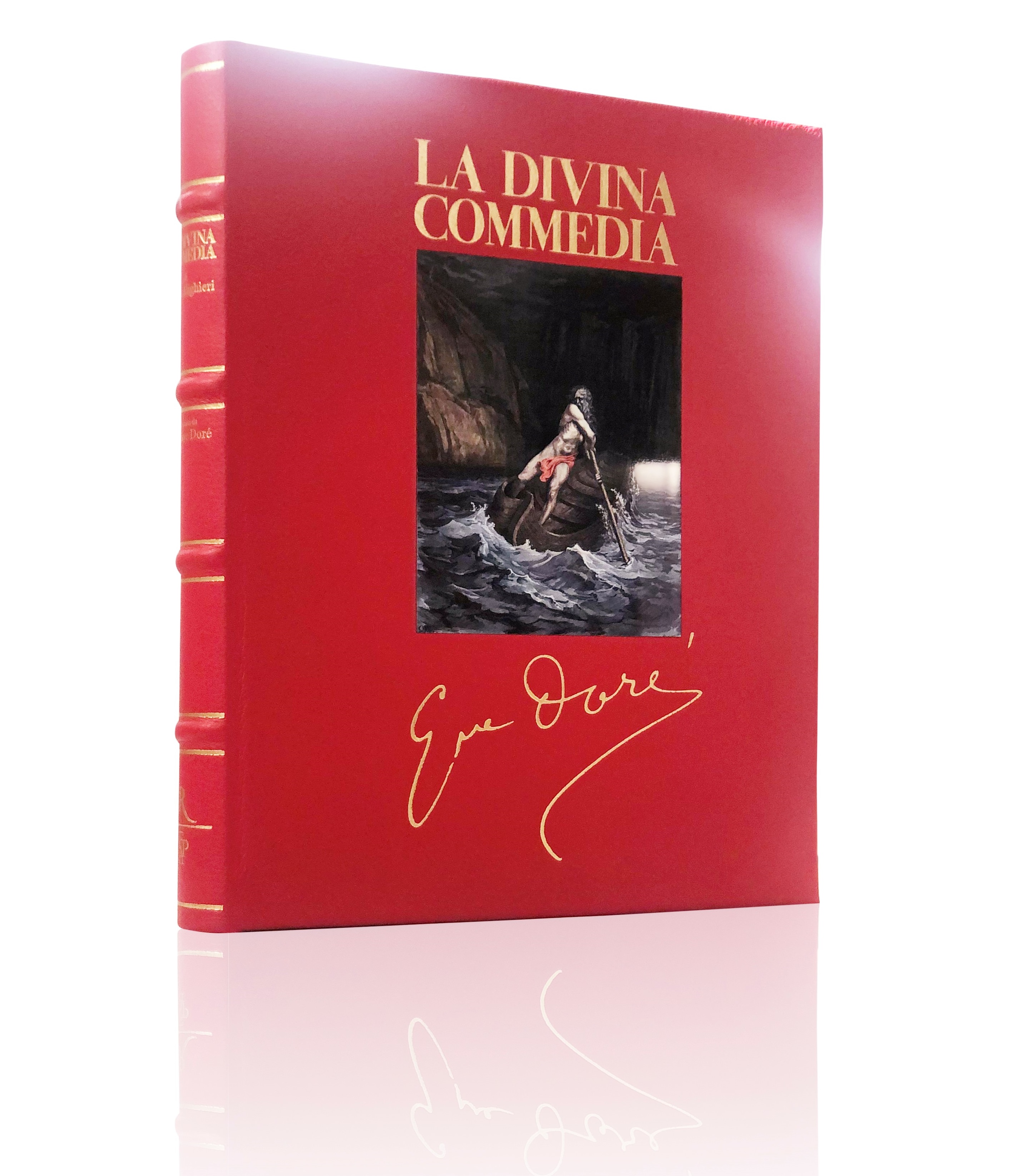 Introduction by Anna Villari (The version by Doré. A narrative in images in the most famous illustrated Divine Comedy of all time.)
Tecnostampa, Pigini Group, has enthusiastically welcomed this new work along with the ‘Fondazione Patrimonio Artistico’, putting all its experience and expertise at the service of the publishing house.

To seal the celebrations for the seven hundred years since the death of Dante Alighieri, the Rizzoli publishing house offers a prestigious limited edition of La Divina Commedia illustrated by Gustave Doré.
The pathos and hope, the splendour of the heavenly skies and the gloomy tragedy of Hell are translated in Doré’s engravings, into visions of shocking power, still capable today of inspiring cinema, comics and animation.

This edition of La Divina Commedia was published by the ‘Fondazione Patrimonio Artistico’ Ltd in collaboration with Rizzoli on the occasion of the seven hundredth anniversary of Dante Alighieri. The volume is printed in a large format, (32,5×40 cm), in a limited edition with one hundred and ninety-nine volumes marked with Arabic numerals from 1/199 to 199/199, this itself being a work of art. It has been created to preserve in time the beauty of poetry and figuration and to be a symbol of the excellence that Dante embodies.

The introduction to the volume has been entrusted to Anna Villari, an art historian and consultant for the historical anniversaries of the Presidency of the italian Council of Ministers. It focuses on the creative path of Gustave Doré and the historical significance of his work. The iconographic corpus of 136 boards created by Gustave Doré, is reproduced from the original edition published in 1869 by Sonzogno, preserved at the Civic Library of Bassano del Grappa. Anna Villari writes in her introduction to the work: Like no other, this great illustrator has been able to interpret Dante’s stories, always providing his unmistakable “version” of Dante on which the imagination of entire generations of readers has been built.

Gustave Doré (Strasbourg 1832 – Paris, 1883)
Gustave Doré was born in Strasbourg in 1832. He revealed from an early age a natural predisposition for drawing. He was just fifteen years old when his works were published in the periodical La caricature: talent, imagination and technical mastery soon put the provincial boy in the spotlight of the Parisian public and critics. Self-taught, he worked on his own training in the halls of the Louvre. The wealth of figures absorbed in those study sessions constitutes the a to z of his inventions. On this basis, Doré’s worldwide fame grows rapidly, first with illustrations of the works of Byron and Balzac, then with Rabelais’ Gargantua and Cervantes’ Don Quixote. At the height of this ascent, with unprecedented proportions for the period, is the illustration of Dante’s Comedy, followed by that of the Bible. The Comedy is undoubtedly the work that more than any other, highlights the multifaceted inspiration of Gustave Doré, stretched from the dark abysses of hell to the bright beatitudes of Paradise, to synthesize a creative path that includes the works of Ludovico Ariosto, Coleridge and Edgar Allan Poe.
The artist died in Paris in 1883.

FONDAZIONE PATRIMONIO ARTISTICO  (Artistic Heritage Foundation)
‘Fondazione Patrimonio Artistico’ was founded in 2019, on the initiative of Rizzoli – Mondadori Group, with a precise mission: to bring to Italian homes a testimony of the Italian historical and artistic heritage, creating valuable publications, limited and numbered, to increase Italians’ awareness of their artistic and cultural history.
The productions range from figurative art, with works by the most renowned masters, to volumes enriched with precious artistic interventions, up to facsimile reproductions of miniated codes, which in medieval times were made in many European countries and today are jealously guarded in museums and libraries, very often in inaccessible vaults.